The other day my mum asked me what I want for Christmas, a hard question to answer now I'm an employed adult. When I was like ten, I'd always be ready with a response, because I used to spend Thursday afternoons at the local newsagent, reading computer game magazines while Mum & Dad did the shopping, and I'd memorise which games had good reviews & dream of what they'd be like. Cheers to the newsagent staff for letting me use their shop as a library, I'm still not sure if that sort of thing was normal.

Christmas in Australia, if you're a fresh Russian arrival like I was at the time, is shocking: the season of snowball fights, Grandfather Frost, and aspic with horseradish becomes the season of walking around in shopping malls to luxuriate in the air conditioning, hearing the same five weird carols on loop, and spending 25th of December swatting away flies and missing Grandpa (not Frost, my real one). You couldn't afford a dud game for Christmas on top of all that! Because it was the pre-2000 and information was in short supply, a kid needed a trustworthy guide.

This British rag was the Virgil to my Dante. 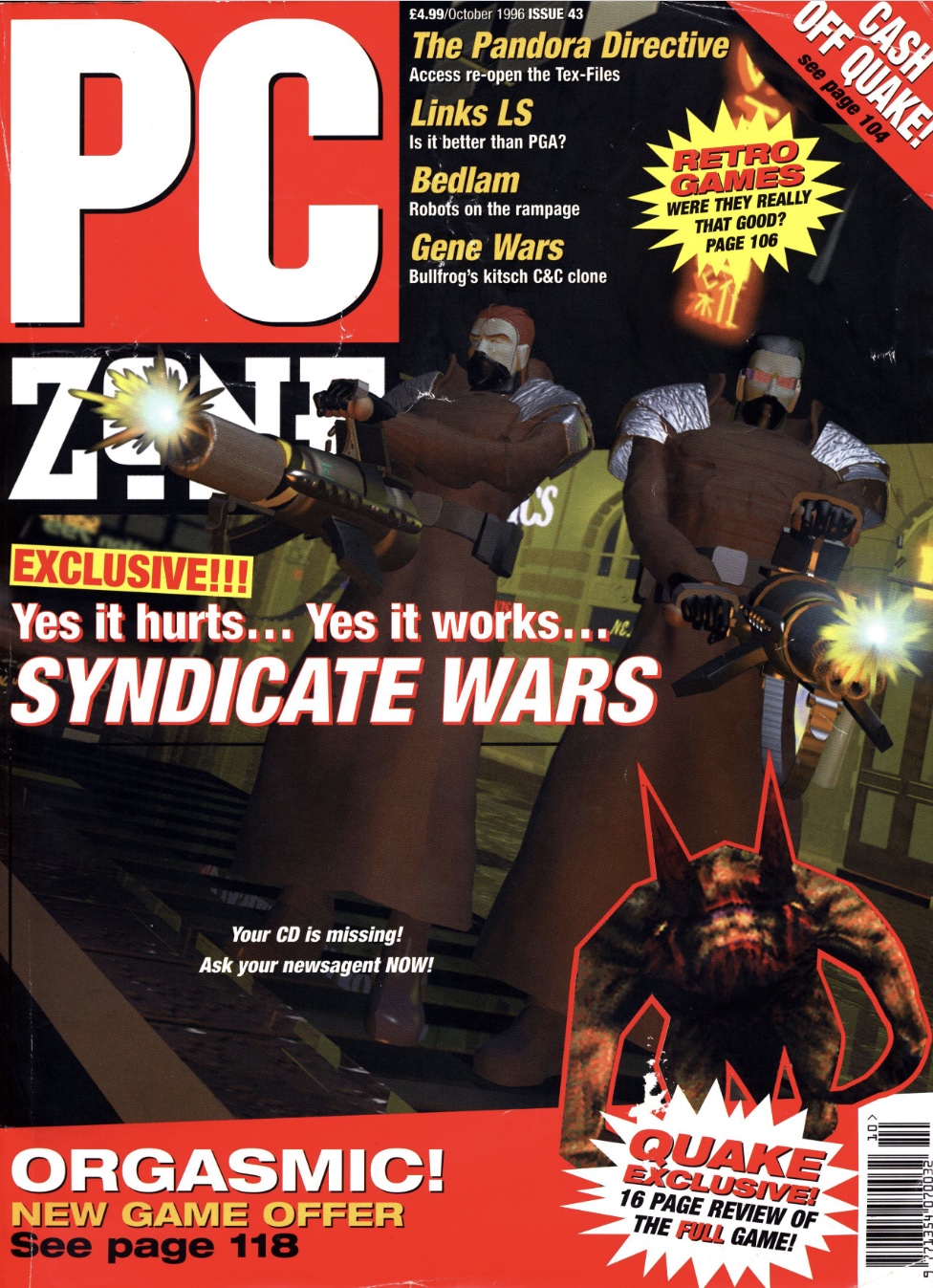 a thing to behold for an ESOL kid. if you cash off, how do you cash on? mum, what does orgasmic mean?

When I found this in the newsagent shelves, my English skills had just reached the stage where I mostly understood jokes and nuance (reason #239 why reading is cool: if you don't understand a joke while watching TV with friends, you might feel obliged to laugh, but the graveyard silence of text never judges or cajoles). This made the actual reading experience fun and mysterious – while I didn't know what "bollocks" or a "naff" were, I could piece it together (sadly but unavoidably, the world becomes a tad less beautiful once one learns what "bollocks" means). Even so PC Zone — tragically defunct as of 2010 — is a beacon of journalism, and that's not my questionable taste talking, the creator of hit TV series Black Mirror was a regular contributor. In one issue there's a picture of him pretending to eat his own butt,

Having just spent an hour browsing scans of the mag (thank you absolute champion who uploaded them!) I reckon PC Zone's charm is in juxtaposition. When a "Zoner" (my just-invented name for their writers, it rhymes with "boner" and they'd want it that way) reviews helicopter/submarine games, you get paragraphs of military history; they'll seriously evaluate game quality and hardware — and then whallop you with "wacky" impressions, wisecracks at the expense of the the French, and jokes about how they're lonely alcoholics. The editor often jumps in to insult the writer ( Like this, you naff bollock - Ed ). You get serious articles about internet cafes and the UK government's anti-pornography legislation, and then you get flight sim demo instructions in the voice of Snoop Dog. 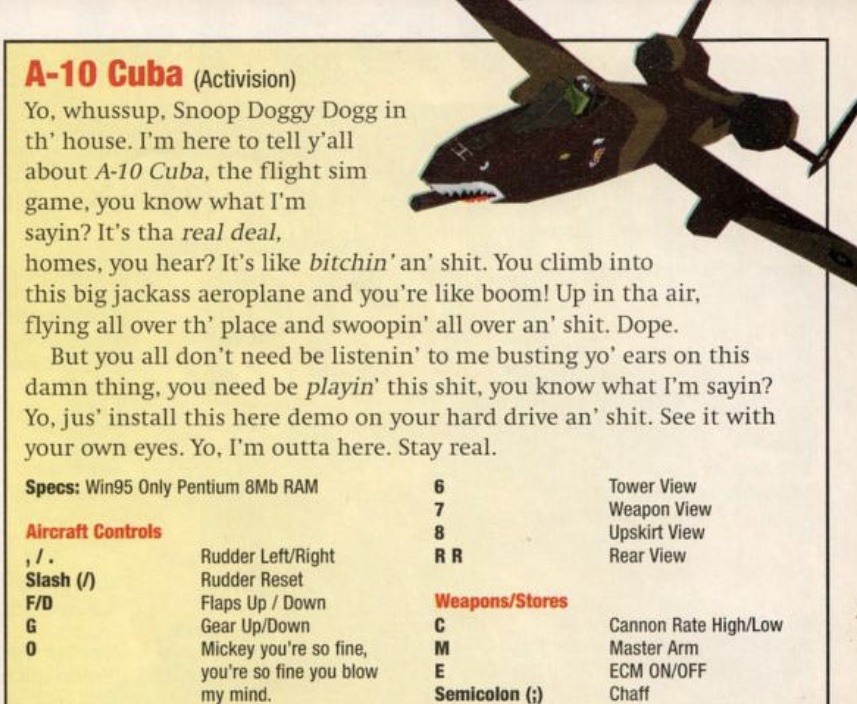 did you think i was kidding?

When you're a kid, anything opinionated and funny (and beleive me for a 10 year old this is luxury humour) is so charming you'd go to war for it.

Looking back on PC Zone now I think there's a temptation to recieve it with condescention, "oh look, British lads making dick jokes in a PC game mag, 1996 what a simple time." That would be cheap. Judging by the handful of issues I just re-read to form an ironclad opinion: it was a publication that took games seriously, and everything else flippantly, and it's earned a prime spot in the lushest greenest meadows of Defunct Magazine Heaven. 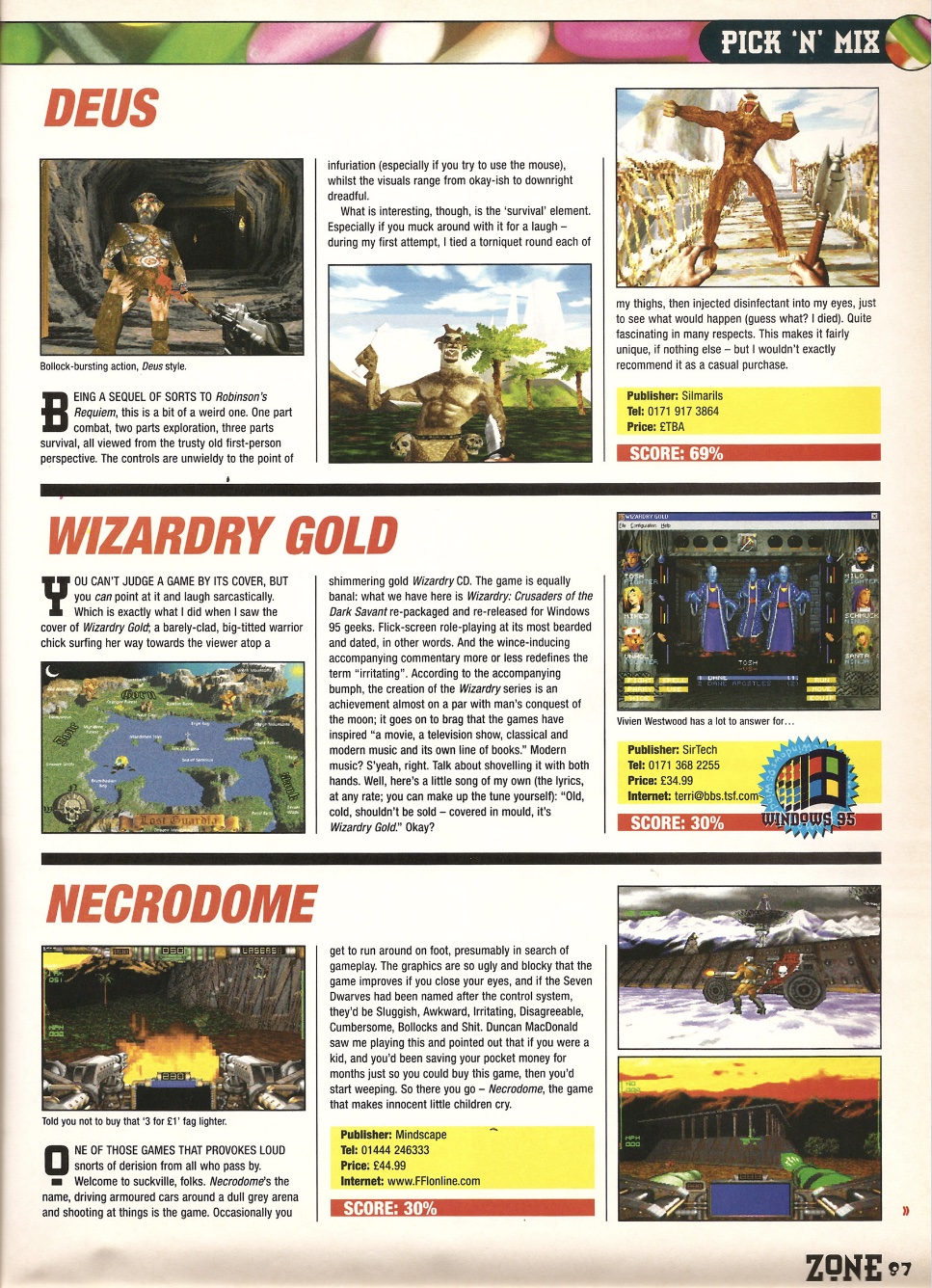 black mirror guy wrote these mini game reviews! his Wizardly Gold song has consistently popped into my head about once a month since i read this page in 1996. source

One guy who sure never read computer magazines, but sure loved Christmas, was celebrated British author and philosopher GK Chesterton. 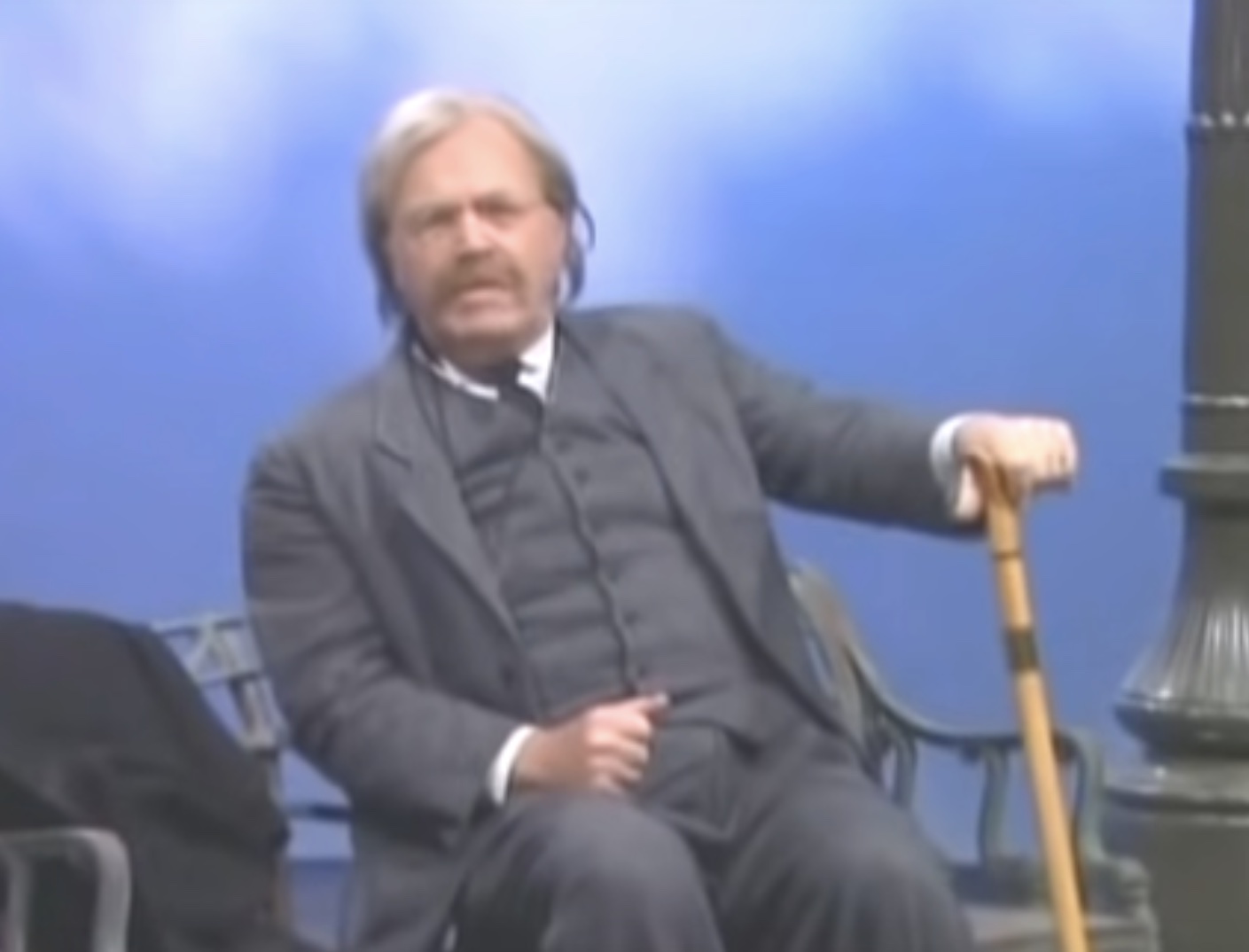 this is a man dressed up as Chesterton from a Catholic TV show in which himself and a man dressed up as Nietzsche trade monologues. doesn't he look like a portly Miyazaki??? If you're at all tempted to look up the original (mentioned last issue), spare yourself the disappointment. this sorta thing couldn't be more up my alley and even I couldn't get through it.

I just re-read his book Orthodoxy, it's Chesterton in full "tweed-and-pipe-fireside" mode outlining his Christian humanist philosophy and approach to life: the importance of fairy-tales, the value of believing in miracles, the power of paradox. He's full of fun quotes: "an inconvenience is only an adventure wrongly considered", "there are no uninteresting things, only uninterested people", but then also he's got a great bit about the paradoxes of Christianity; how orthodox rules lead to freedom in life; how God on the cross, for a moment, became an atheist.

It's easy to brand Chesterton as "quaint cozy Christian grandpa", but he's a phenomenal author whose (over one century old!) writings hold up, who also happens to have been quaint and cozy and Christian though sadly never a grandpa. Perhaps a metaphorical grandpa, to his fans. Possibly he's a frustrating read for committed materialists (in Orthodoxy he dismisses the theory of evolution), but that's your loss, friends! He's a more fun read that Nietzsche, too, & also more correct; reading him chills me out. He also wrote a bunch of detective novels, which I keep meaning to read, in which a priest solves crimes. Wacky famous atheist leftist philosopher Slavoj Zizek really likes him, as do lots of dull internet Catholics, so you know he's got cross-factional appeal.

I bet a million dubloons Nietzsche hated Christmas. I went through a teen phase of hating Christmas, I'm absolutely on Team Christmas now (is it a team??? are there teams??? I don't think there are). I reckon it's for a similar reason — to make sweeping inaccuate generalisations — that younger people tend to prefer Dostoyevsky while older folk prefer Tolstoy, When you're young, often you like edgy and gloomy stuff, because in many ways your life is safe. Then you live life, experience actual gloom, also all the edgy stuff turns out is hollow. Darkness is no longer titillating. You just want something nice! Actually I still prefer Dostoyevsky, but otherwise I'm totally on board with nice stuff now. Save the "grim darkness" and Christmas-grumbling for pimply shut-in teens.

And Christmas is super nice. It's cool when people celebrate something at the same time! I can't wait to day-drink XXXX Gold and surreptitiously chew Nicotine gum while hoping my mother doesn't notice; half-heartedly follow the Test cricket, eat aspic and horseradish. May you get the computer games you want and have a nice unironic time.