I learned about the internet from the library, before I ever "logged on" I read books on what it was and how to use it, in the late '90s discovering its existence was exactly like discovering magic had been invented. Even now, I’m checking AFL scores on my phone at the tram stop, I try to maintain an awareness of ‘going on the internet’, crossing some astral membrane. I want to always see it as a 'tool, or a 'place' one visits, although it's a seamless part of life: you check in to COVID tracing at LiquorLand, Mum posts a Minion meme to your Facebook wall, it's another 'useful thing in the world' like ovens and hats and those ubertall floppy pool noodle guys outside used car dealerships getting jerked around by the wind. 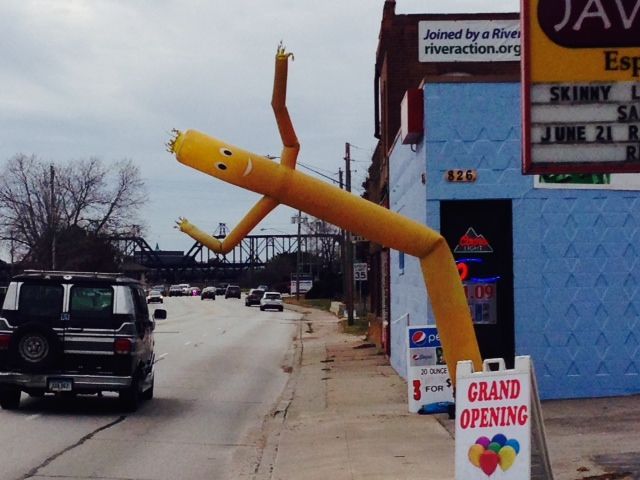 The two books that taught the internet to me were so influential on my malleable teenage psyche that they moulded me into the exact person I am today. Direct all complaints about my personality to the two writers described below.

They say (well, I say) novels are the best way to get across the experience of being somebody utterly different to yourself. Constrained by this maligned "blog" format (should Drei Cafe pivot to a TikTok???) I have no effective way to relate what it was like to be twelve years old, at the tail-end of the millennium, asking mum if I could "go" on "the internet": a complex technological feat that tied up the phone line, but not for long, because we could only pay our ISP (appropriately called HyperNet) for 20 internet hours a month.

I rationed those hours like smokes on the Eastern Front. Armed with a ammo-belt of library books, I dashed across the no-man's-lands of USENET (a message board protocol), IRC (a chat protocol; once I cybered, if you don’t know what that is, don’t ask), and stormed the walls of the Web (these war metaphors aren’t going to hold). The latter was with the help of a tome called The Internet Yellow Pages, which listed fun websites you could visit. The URLs were in the book, the idea is you find a website you like, and type it into your computer. It sounds like I'm making it up but I'm not! Even the thing about AirDancers is true.

The flashy tech skills to make it all possible I learnt from Sherry Kinkoph. She's authored a boatload of technical books, her magnum opus is The Complete Idiots Guide to Modems and Online Services 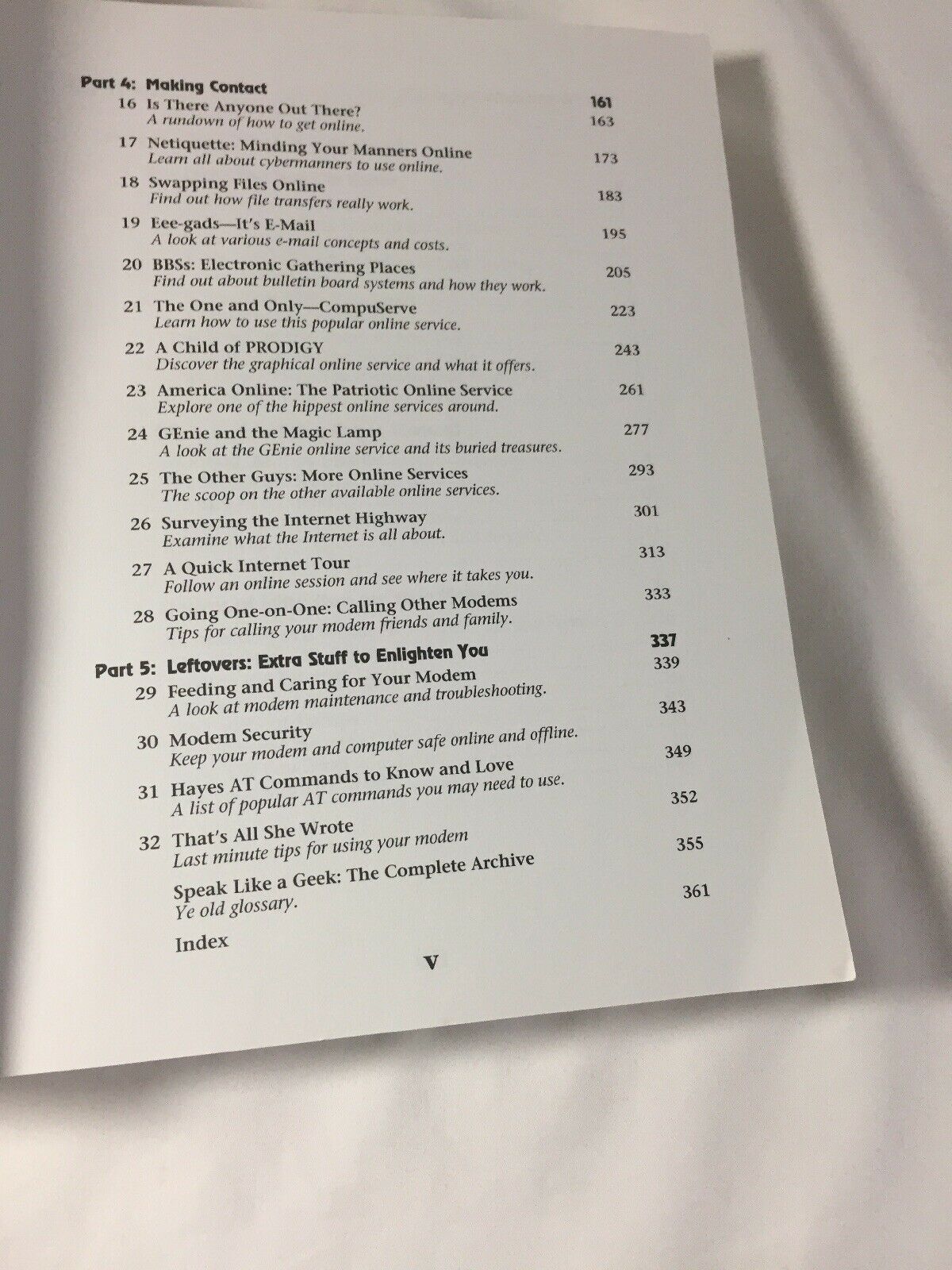 The cover speaks for itself, click for a big version. Yes its a 'For Dummies' ripoff! Source: ebay user 'ewbooksandmore' (hope you got a good price mate). couldn't find a picture of mysterious Kinkoph.

With wit and charm Sherry Kinkoph took the layman through the ins and outs of modems (how do data communications work? what's the deal with the V.90 protocol? how do you send a fax with a modem?), we just remember funny dialup sounds, but the whole shebang was super technical! It even came with a tear-out card of "lifesaving shortcuts and reminders" (instructions on a speedy way to perform CPR? unclear).

After modems, Kinkoph covered online services. These, in 1994, were like tiny internets of their own. Imagine a web app with a chatroom, noticeboards, webpages, all the jazz, and you pay 3USD/hour to access it, instead of accessing the actual internet, which is anyway really complex and for nerds. All these online services were in the States & so I had no chance of even using them, even if somehow the 3USD/hour became an option. That didn't stop me from dreaming.

You had GEnie, PRODIGY, America Online, CompuServe. At the end of the book, Kinkoph even covered the Internet. Apparently it was quite complex and probably not worth the trouble! I'm incline to agree even now.

If Kinkoph's guide was having a clever sensible friend teach you computing, Surfing on the Internet by JC Herz is you hearing a knock on your bedroom window - what the hell, it's 10pm, mum's asleep, there's an Algebra exam tomorrow so who could it be ohhhh its JC Hertz ! She's got a grin and a pack of Malboro Lights! Unable to refuse her mischievous twinkling eyes, you clamber over the windowsill. The backyard grass is cold on your bare feet as you follow your cool dangerous friend to the football oval, where she tells you: forget what that nerd Kinkoph says, the 'net's the place to be. 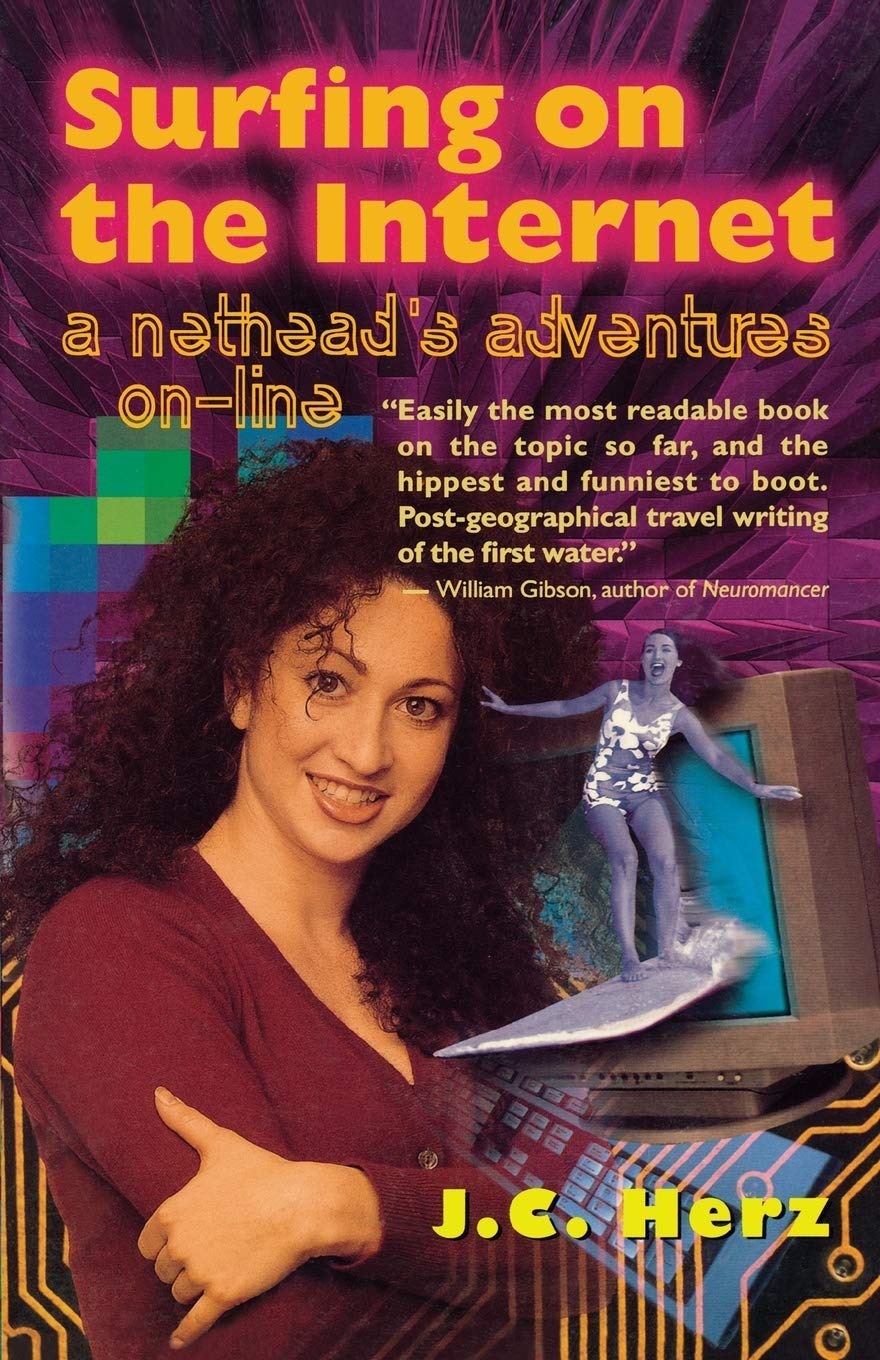 99% sure that's Herz on the cover. I read this book about a hundred times, though the last time was ~15 years back. Yes I'm describing it entirely from memory.

The Internet, young JC declares in 1995, happens at night: college, sleep, internet, pick two. If it’s cutting-edge and on-line, Herz is there! Forget the Web: she’s on USENET hanging out on the message-board alt.barney.dinosaur.die.die.die (USENET board names conform to a strict hierarchy except for those starting with 'alt'), where grown adults write fan-fiction about violent battles with beloved children’s figure Barney the Dinosaur (tougher than he looks). She hangs out on IRC chatrooms, where friendships are broken by 'netsplits', and befriends a dude for whom the ‘net is the only human contact (novel, at the time); takes part in salacious dude-on-dude 'cyber'. She meditates on impermanence trying to break a Beach Boys cassette in a text-only precursor to World of Warcraft and joins an ubercool community full of famous hackers. Herz doesn't write as if she's subordinate to an identity group, the way its popular to nowadays, but her gender still makes her 'the Other': the early 'net is 95% weird dudes, so revealing herself as a woman marks her. She's a professional journalist, though, she knows what she's doing: she's a perceptive funny voice in a lawless ethereal world.

Herz stands at a radical dawn of a new era, a unique point from which to explore human relations mediated by insane new technology. The early net is literally anarchism: online spaces are built by enthusiasts and not corporations, things run on consensus and ego, no-one is tracking you/trying to brainwash you into an ideology-product-whatever. The Web is barely (if at all) mentioned, what Herz cares about is human interaction (turns into a tiger and nuzzles yr thigh, in the paraphrased words of some man trying to 'cyber' her). Nostalgia’s got nothing to do with this book's power: what it is, it an athropological treasure.

Cybering is like sexting but in 1995, by the way! Sorry I tried to keep it PG.

When I was 14 I hung out on IRC chatroom #irc4teens (possibly the only teen there?) and occasionally visited #ircbar, where the chatters pretend to be in a bar. "I'll have a beer, bartender" I typed into my ancient Pentium 150. Going into a club with a fake ID at 17 wasn't as thrilling as that!!!

I might go there now, in fact. Hope you're good bye!!!