This Drei Cafe is about mysticism, prophets and oracles. If you yourself a prophet and/or oracle please tell me when the latest Melbourne 'situation' will end so I can go to the park with my friends, in return allow me to tell you about Dostoevsky and The Internet Oracle! Pretend I wrote this in a crypt by the dying light of a candle and I'm in a spooky monk's robe because I'm totally getting into old things at the moment: gunning Bach and Chopin (bangers), watching Shakespeare plays online, old books go without saying. At this stage I'll soon address the liquor store employees as "thou", forget the wheel, and finally shrink into an amoeba.

I re-read The Brothers Karamazov last month, for the first time in English (which translation? the Drei Cafe website has a page on this, get Pevear and Volokhonsky), my fiance asked me what it was about, "ah yes" I said, "you've got these brothers, surname Karamazov" and waffled for five minutes without answering: I am hopeless at elevator pitches (to succeed I need to become trapped in the elevator with the pitch-ee, like a '90s sitcom when two characters need to resolve their differences). Anyway my game plan is to stew in my failure: Brothers is a paradox. 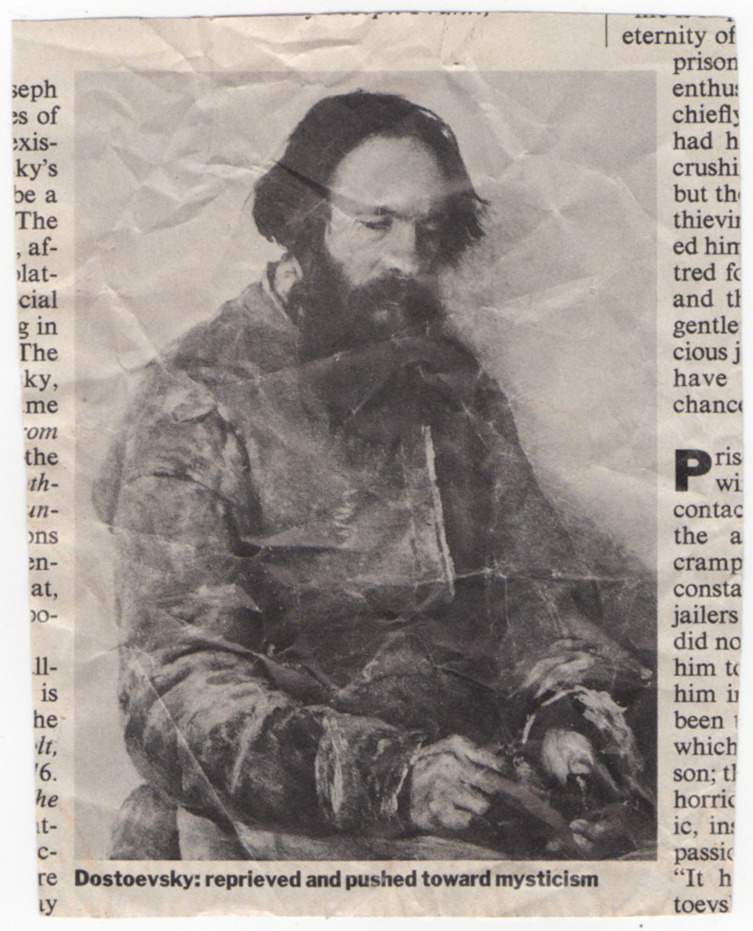 Dostoevsky, preparing to pen the beach read of this summer. source unknown.

It's loads of people's favourite novel, Dostoevsky's last (indented to be the first of two books), in which a bunch of long-lost brothers re-unite in a shitty village around their arsehole dad. One brother is passionate, one is intellectual, one's a kindly mystic; Dostoevsky bangs them together like a kid playing toy soldiers (on the kid's bedroom wall, an ikon of the Theotokos bleeds from the eyes). We're in 1800's Russia, life is hard and everyone is super emotional! We march through a long introduction, "wow that's a lot of names", then it's histrionics: arguments, monologues, terrible decisions, people losing their shit. Death is never far in Dostoevsky, or in 1800s Russia, so Brothers gives us a murder mystery and a courtroom drama, in which perhaps it is 'the new Russia' that is metaphorically is at trial (which metaphor killed the old one? this matters). Everything's absurdly metaphorical in Dostoyevksy: he writes about people pushed past their limits, possessed by ideas, flailing like marionettes. I love this shit; it's good to be lost in a giant 1800s novel where everyone's worrying about the big stuff: is there a God, what does it mean to exist, what are we free to do, how do we live amidst such suffering and pain? I myself worry about such stuff, you know. There's more to me than gags!

There's this piece of literary fiction writer's advice that states, if you're writing a character holding some ideology or viewpoint you're against, you need to give them a chance make the strongest point possible (kinda like "steelmanning" in internet parlance), this isn't moralistic but practical, if you don't do this, your writing'll probably read crappy and cheap. So while on the surface it seems Dostoevsky points to answers for those Big Questions (in the vague direction of love and the guiding light of God), if you look closer you see he's set rabid dogs upon all of his ostensible points and they're running in panic through dense a fog of inarticulable truth. One thing I do think Brothers firmly claims is the horror of the notion "we just have to reason out the right ideology, and follow it unwaveringly, and everything will be okay ", strongest evidence of this is in the superfamous Grand Inquisitor chapter (they sell just that chapter as a tiny book now, imagine that! bad idea, you need the context). Dostoevsky was a devout Orthodox Christian, critical of the liberals of his time, but he's another one example of how, when it comes to great authors, their personal ideologies don't matter much: Dostoevsky the Artist destroys all other Dostoyevskies.

And there's no correct answer to "what is the book about" because it's so rich that every reader takes away something different! OK, that's a cop-out. It's about excess.

Russian critics like to call Dostoevsky "the prophet of the 20th century", connecting his warnings of heartless solipsistic uber-rationalism to Stalinism and fascism. The 1989 internet, not to be outdone, brought us an oracle of its own, aptly called The Internet Oracle.

This was "an effort at collective humour in a pseudo-Socratic question-and-answer format" (thanks Wikipedia) and worked like this: you sign up to the Internet Oracle, and e-mail a question to the Oracle's address. Your questions goes to a random Oracle user, while you receive another random user's question. You write a reply pretending you are, in fact, the great and mighty Internet Oracle! The random user does the same, and your burning query is answered with humour and poise. The questions and answers can be absolutely anything, but the funniest ones get compiled into a periodic digest, so it better be funny!

I discovered this in like 1998 and thought it was the coolest thing ever (as a kid you get awed by any group, who you share a niche interest with, creating a new thing). I browsed through some archives just now, hmmm it's perhaps still riotous if you're a computer programmer in the 90's or if you adore Douglas Adams and Bill Gates jokes (redundant? the former group are wholly in the latter). It's aged like milk; let's gently call it you-had-to-be-there humour.

an example of the oracle in action. source: theinternetoracle.org

Perhaps stick to Drei Cafe for your laughs, and appreciate The Internet Oracle for being a seminal example of early electronic writing: a group making anonymous contributions to a communal work (the digests don't tell you who wrote what); developing shared customs (answers ended with "you owe the oracle [something funny]"), recurring characters (a priest, a caveman), in-jokes. Name and ego step aside in the service of a gag, so the words shine, not the figures behind them. I was going to poke fun at it again, but let's face it, this blog will read just as ridiculous in 20 years time.

Allow me to introduce you to Thomas Zimmer, a bloke in Queensland who each year releases a calendar on which he writes little poems (sometimes rhyming, sometimes not) describing each star sign & then makes predictions for the coming year. If you've been to a Melbourne sharehouse where someone owns harem pants and has been to Nepal more than once, they had one in the bathroom. I love this calendar and I try to buy one every year! It is full of enough mystical symbology to rival the cover of Johanna Newsom's Ys, in the middle is a smiling sun with a moustache (Thomas himself?); in the corner is a benevolent moon (his partner? anima?); at the bottom you find moon planting times, and surrounding the moustached sun is "astrological and political overview of the year to come". 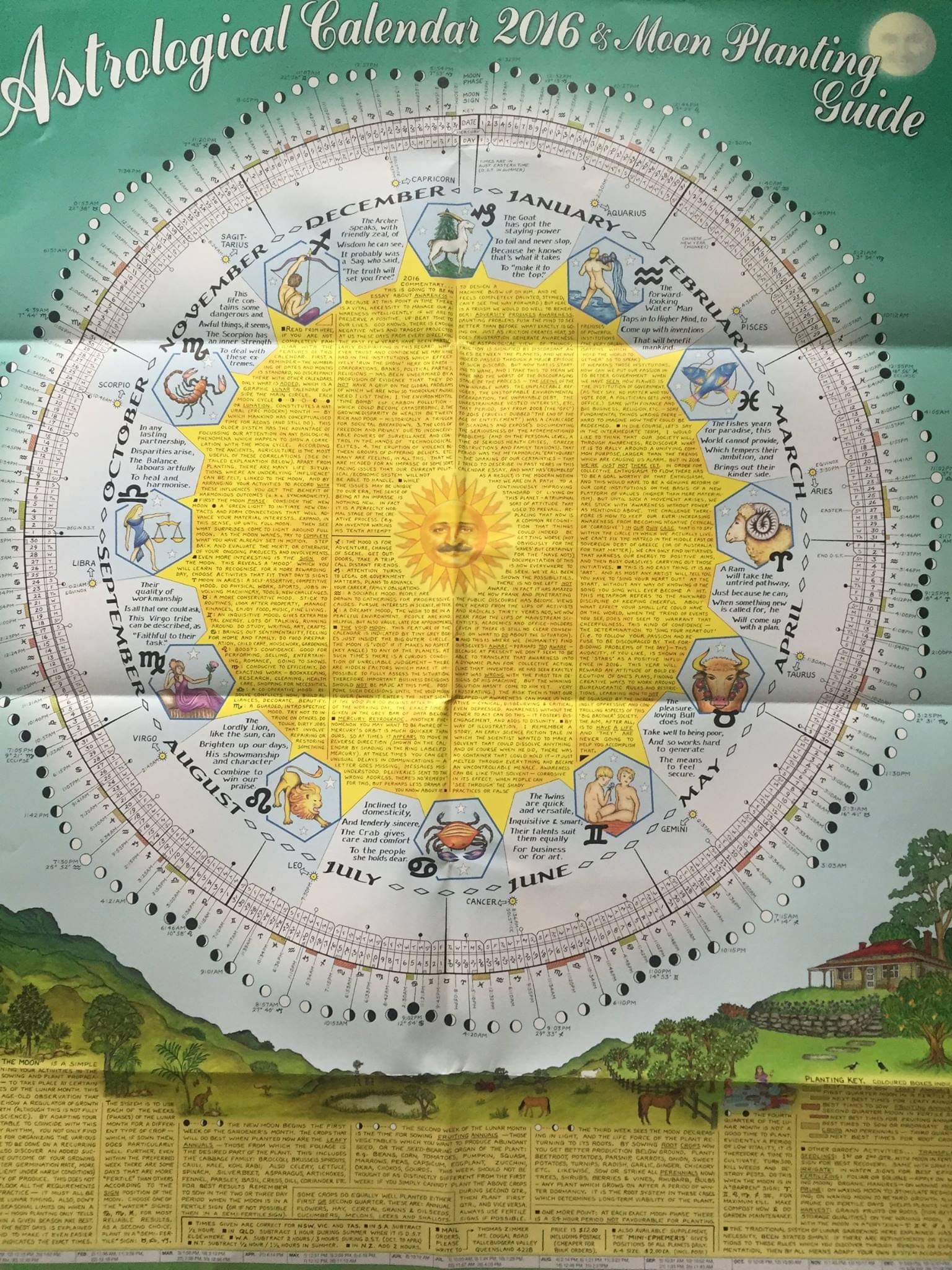 i had this above the toilet once. source: https://www.facebook.com/WiseSunMoonStars/ its sidebar links to the shop. while this is not a sponsored post don't imagine im above such mercantilism, get your spare change together and call if you want me to promote your self-published cookbook

In 2018 he wrote about the world in a transitional time of turmoil (I think) and in 2019 he predicted a time of painful healing and renewal (I assume; I don't actually remember), I didn't get one for 2021, and it'd be weird to order it now, it's August. I tried to find an online pic & zoom in far enough for you, but nothing hi-res enough was available. Sorry to leave you in the lurch! You'll just have to prophesize 2021 yourself.